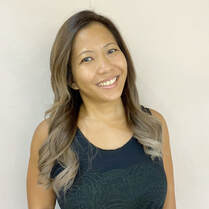 Julie began her yoga practice in 2003 in Boston, Massachusetts, in the United States. She studied at the Baron Baptiste Power Yoga Studios where she practiced Power Vinyasa Yoga, a dynamic flow, which synchronizes breathing and movement. Julie also apprenticed as a teacher’s assistant at Prana Power Yoga in Boston where she learnt how to guide, nurture and help students deepen their practice. It was here that she began to appreciate and understand the connection and energy between the student and the teacher.

Julie trained as a teacher in Bali, Indonesia at Shakti Spirit Yoga with Rachel Hull. Along with a strong Ayurvedic component, the course taught a much gentler form of Vinyasa Flow Yoga, focusing on safety and touching upon yoga as a form of physical therapy. More recently, Julie completed an intensive training under the guidance of Edward Clark and Nikki Durrant of Tripsichore Yoga and continues her journey as both teacher and student throughout the year.

Today, Julie incorporates all of her past experiences into her teaching style. She teaches Hatha Yoga, Power Yoga, Vinyasa Flow and Yoga Nidra. She teaches students at all levels including those who have never practiced yoga before. She hopes that students will walk away from her classes with a sense of peace, joy and positivity. Kathy is an international yoga teacher currently based in Singapore. Although yoga and complementary health was always in her family, she only picked up yoga as a teenager during a spiritual seeking shortly after her mother passed. Through her practice, she learned to how find solace, balance and ease. This later hugely influenced the way she connects and teaches her students. Teaching since 2013, her classes draw from many different traditions which weave into an intuitive blend of Hatha, Kundalini, Yin and Thai massage. She is also a trained sound healer and often incorporates sound therapy and mantra invocation in her classes. Through breath, philosophy and movement, she hopes to help you find what feels good and ultimately cultivate a deeper connection with yourself. Having led over 20 retreats in various locations around Asia since 2016, Kathy enjoys creating and holding space for others to further their personal development and spirituality. When she’s not leading workshops and retreats, she runs a mentorship programme for newly trained and seasoned yoga teachers alike who are aspiring to turn their passion into a successful business. She also runs a leading community collective called Urban Yogis in Singapore. Working with a community of Teachers from all over the world, Urban Yogis offers a unique, fun and accessible way for everyone to enjoy yoga outside of the traditional studio setting. 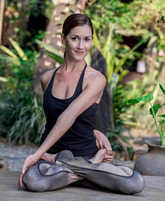 Allison discovered her love of movement when she enrolled in a classical ballet academy at the age of 10 in her native California. She went on to complete a Bachelors of Arts degree in dance and enjoyed a nearly 10 year professional career with a modern dance company touring all over California and various festivals across the United States. She began teaching the Pilates Method in 2007 having hands on experience with everyone from  professional athletes to senior citizen to people recovering from surgeries, injuries, and pre/post childbirth. Life changes led her to pursues a deeper philosophical and mindful approach to body work, and in 2012 she moved into the Konalani Ashram in Hawaii to intensely study the 8 limbs of yoga. Allison taught dynamic advanced yoga classes as well as founded a company to bring basic wellness principles and movement therapy to people in the corporate workplace. Her love of travel ultimately led her to relocate to Laos and she has since taught in retreat centers and yoga schools in Thailand, Cambodia, Sri Lanka, and Laos. Teaching people from all over the world has given Allison yet another layer of unique perspective to understand a wide variety of students. You can expect her classes to be detail oriented and in depth while having a sense of inclusivity so that everyone may reap the benefits of the practice. 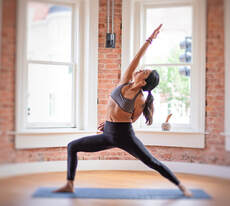 In 2016, Mana left her creative director/consultant position in Japan's fashion industry after almost 2 decades. She started traveling more to get closer to her true nature and joined yoga classes while traveling in Southeast Asia. After she got back to Tokyo, she took practicing seriously. She finally decided to move to Chiang Mai, Thailand to change her lifestyle from one of the busiest cities, Tokyo, and go back to the sprit itself. She has found healing, compassion, and peaceful mind through ashtanga yoga practice and meditation. This transformation is what she shares and offers through her teachings. Mana has been extensively studying, practicing, teaching, and traveling throughout the world including , Thailand, Laos, Japan and Washington DC, USA.

​Fun fact: In 2016, Mana came to Laos as a student on one of our retreats. Since then, she has returned to two more retreats (once as an assistant). Mana also came back to Laos to teach regular classes as part of the Luang Prabang Yoga team. See more about Mana at ManaTakai.com 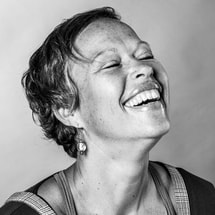 Antje practiced different types of yoga for 15 years until she moved to Thailand for a job. In Chiang Mai she started practicing Ashtanga and Vinyasa on a regular basis and only then did the Prana really hit her and she understood what is meant by 'Yoga is something I am, not something I do'. She wanted to learn more about the philosophy behind this movement therapy and spread the Love. Numerous workshops and the iflow Teacher Training in Ubud, Bali with Amy Pastore gave her the knowledge and courage to find 'her kind of yoga' and teach it. Antje's teaching style is fluid, modern, playful and dancy, reflecting the many sports and different types of yoga that have influenced her practice. She has been teaching yoga locally and internationally since 2013. Her classes are a perfect balance between intensity and centering and will leave students feeling high and smiling for hours. 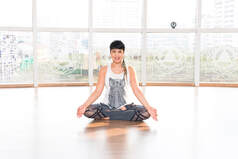 Guide is a former university lecturer, Ed.,D in Curriculum and Instruction, Thai by nationality, citizen of the world by spirit! Her passion and dedication to yoga teaching has been mentioned by all the yogis meeting her on and off the mat. Guide has trained in Vinyasa Yoga, Ashtanga-Hatha, Alignment-Based Teacher Training, Meditation and Reiki. She teaches vinyasa sequencing design, Yoga philosophy, Advaita Vedanta, yoga nidra and chakra meditation for Yoga Teacher Trainings in Thailand, India, Kuwait, Indonesia, Laos, Vietnam, Japan and USA. She believes that meditation is truly the key to inner self exploration by which as a yoga teacher, we all have to take yoga teaching into the state where the practictioner can feel the "oneness" within.